Everyone groans and tuts when their car insurance renewal letter comes through the post and they see how much their policy has risen yet again. But car insurance is a legal requirement and an absolute life saver if something unfortunately does go wrong. Most people tend to claim a few hundred or maybe into the thousands on their insurance if they have an accident and although that will have an impact on how much their premium will rise by it is nothing compared to these next examples. Insurers hide your eyes, as we reveal a few of the highest car insurance claims made to date. 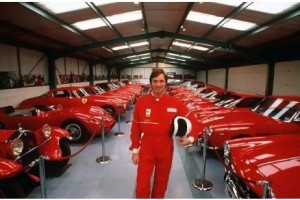 Lord Brocket had built up one of the world’s largest collection of classic Ferraris and Maseratis – a whopping forty-two in total! Within this collection were three unique Ferraris, Lauda?s 1971 Formula One Ferrari and the legendary Fangio Maserati 300s, considered by many to be the best sports racing car of all time. However, when Lord Brocket came into financial trouble, through various debts amassed from the costs of keeping his stately home, Brocket Hall in Hertfordshire, he came up with a plan that would get him into a lot of trouble.? In 1991, Brocket claimed that three of his prized Ferraris and a Maserati had been stolen from the grounds of his ancestral home.? He was awarded an insurance payout of a whopping ?4.3 million!! Unfortunately for him, his wife confessed to his insurance company that he had actually cut up the cars himself and buried them within the ground of his stately home in order to use the payout to clear his debts. Lord Brocket was jailed for 2 1/2 years for insurance fraud – not such a clever plan after all! 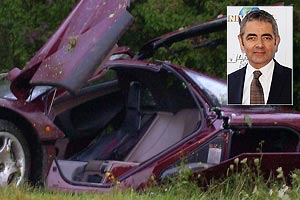 Back in 2011, Rowan Atkinson of Mr Bean and Blackadder fame, hit a slippery patch on a road near Peterborough whilst driving his beloved McLaren F1. Atkinson, 58, who is worth a reported ?71 million suffered a shoulder injury but that was nothing to what his insurance company suffered! Atkinson had bought the car for ?640,000 in 1997 and had already crashed it in 1991. This time, however a lot more damage was caused. He lost control of the 240mph supercar and hit a tree, which left the car?s 6.1-litre engine 20-yards away from the rest of the vehicle. The car was sent off to technicians at McLaren Special Operations who spent four weeks calculating how much the car would cost to repair – with the final figure standing at ?910,000! This amount was three times bigger than the most expensive repair claim previously documented – a ?300,000 claim paid by Aviva to fix a crashed Pagani Zonda in 2010. The job was given the go-ahead by his insurance company as it was calculated that the F1?s value had soared, with one immaculate model selling for ?3.5 million in 2012.

Fortunately for Atkinson, he escaped relatively unscathed.? For most big insurance payouts however, this is not the case, as the next few examples demonstrate.

Giles Harding of London, was a passenger of a car driven by his girlfriend when they were travelling in Australia. When his girlfriend lost control and crashed the car, Harding suffered sever injuries and was left paralysed from the neck down. It was decided that the damages would be assessed according to English Law and he was granted ?5.5 million from his insurance company.

Gary Hart was driving on the M62 when he fell asleep at the wheel of his Land Rover and veered off on to the East Coast main line. The Land Rover got stuck on the tracks, which resulted in a train colliding with the car, killing 6 passengers, 4 rail staff, and injuring more than 80 others. Mr. Hart?s insurance company were forced to payout ?30 million, which was one of the most extensive payouts in history.

Mr Bryan Drysdale committed suicide by parking his car onto train tracks.? This not only resulted in his death, but sadly that of 7 innocent people. His selfish actions also caused injuries to 120 people, 18 of which were serious. The total payout was a claim of ?50 million.

To legally drive a car you must have car insurance and as these cases show, there are times when having insurance really can pay off.